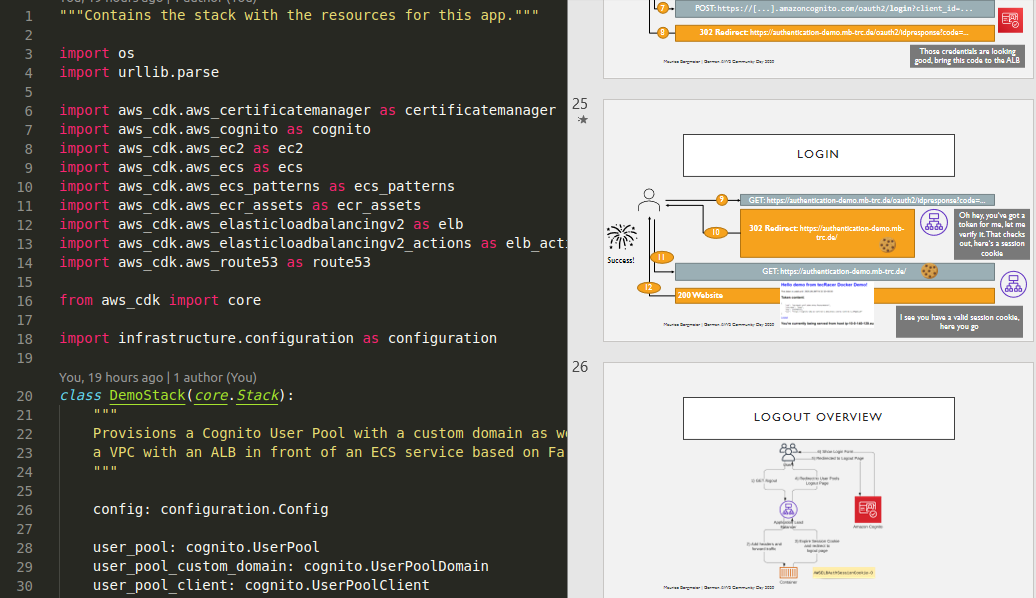 I had originally planned to write about how indexes work this week, but that will have to wait a little. I’m currently preparing for my first conference talk at the German AWS Community Day on September 25, 2020. That conference will be held online as a result of a certain global pandemic. The talks will be pre-recorded, presumably to reduce the technical complexity for the organizers, who are doing this on their spare time. The deadline for handing in the recording is next Friday (11.09.2020) and because of that I had to shift priorities a little bit.

So for today I thought I’d share a little bit about my preparation for this talk.

My talk will be about user management with Cognito, Fargate, Python and the CDK. It’s based on two blog articles I wrote back in January and March on the tecRacer AWS blog:

I’m going to explain why it’s a good idea, to outsource user management and also how to do that by showing the audience how to build a container based app, where the authentication is done at the load balancer level in combination with Cognito. I think it will be sort of the video version of the second blog post with a little more details and background, but I’m not done yet, so we’ll see.

In the past few years I have given quite a few presentations, but this talk is different for me. When I give a presentation, I usually know a lot about my target audience, either because I’ve been in their position a few months earlier or I’ve been working with them for a while already. This time I have no idea, who will be watching the talk and can’t even see or respond, if I notice I’m starting to lose them. That’s a little scary, because now I’ll have to somehow find the middle ground between not boring the audience with things they already know and not losing them, because I talk about stuff that’s too advanced. My current strategy to work with that, is to show the video to a few friends and colleagues beforehand and get their feedback. Doing that requires me actually recording and editing a video though.

From a technical perspective this seems fairly easy. I plan to use open broadcaster to record my webcam, microphone and screen on which I give the presentation and show the demo. I’ve tried that and it seems fairly easy for a basic setup. Then I have to somehow take that .mkv file, edit it and convert it to an mp4 video. Since I have customer projects to work on next week, I lack the time to become a professional video editor before the deadline (for the record: that’s sarcasm, I know professional video editing is really hard). I think I’m going to try a tool called OpenShot which is both free and open source. All of this is based on the assumption, that I have content by then.

I’ve been working on a new version of the demo from the original article on the weekend. It is now at a point, where I’d consider it mostly done. It’s very similar in the way the deployed architecture looks, compared to the original blog post, but the way that deployment happens has changed a lot. The original code was written for CDK version 1.27 and the new one for CDK version 1.62 - that team moves and releases at an incredible speed. It’s now more polished and a lot better documented, since I have learned a lot about the CDK in the past six months The CDK has also improved a lot and closed a few gaps, where I had to rely on the underlying CloudFormation abstraction layer before.

The presentation is, at the time of writing this (Sunday ~8pm), about 60-70% done I’d say and it was a lot of work, because I chose to go into more detail concerning the user management workflows that are implemented by the app. Creating animated slides for a lot of HTTP requests and redirects, that are at least somewhat understandable, takes a while.

I think I’m on schedule with the talk, although I have to confess that I don’t have a schedule, only a deadline. I’m confident it will be done by then and I’ll have learned a lot about tools like OBS and OpenShot. I already have learned a few lessons from this experience and maybe I’ll do a post mortem after the talk.

So if you’re interested in AWS an happen to speak german (most talks will be in german, including mine) I recommend you get a ticket for the free German AWS Community Day and maybe check out my talk.

For questions, concerns, feedback etc. you can reach me on Twitter @Maurice_Brg.